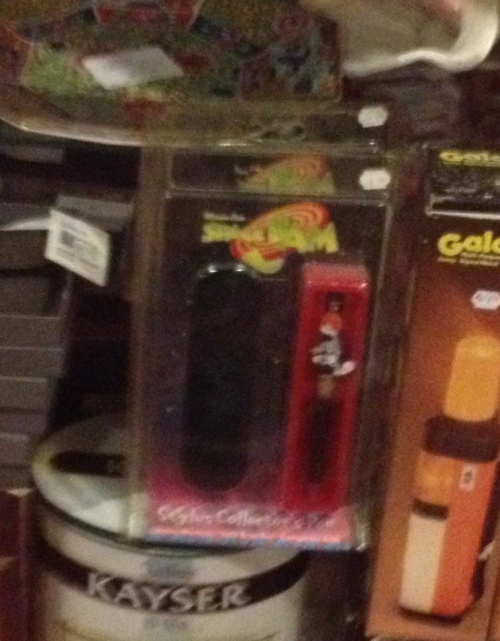 (Less blurry picture available here, although it’s not the same exact one I found.)

Okay, yeah, I know you’re probably getting tired of Space Jam (haha, like that’s a thing that’s possible), but this one comes with a story.

I found it in a museum.

I’m not going to say what it is or where it is. The person who runs it seems to Google himself pretty regularly (or maybe his kids do, or else he just knows when someone’s talking about him on the Internet), and I don’t want him to find this. Please don’t try to find it yourself, either; I don’t want anyone harassing the guy because they read my dumb post about it.

(All quotes are in italics because they’re not exact. I didn’t have a recorder with me or the presence of mind to start taking notes, but I’ve tried my best to convey what he was saying and the way he was saying it.)

I found out about this museum in a book called “Weird Ohio,” and it promised I would get to learn about the eight secret Presidents of the United States of America, the ones no one ever tells you about. (Actually ten, by the proprietor’s latest count, but we’ll get to that in a bit.) I’d like to say I wasn’t just going there because it sounded like absolute crazytown, but I wouldn’t be fooling anyone. You know I love crazytown. This blog is nothing BUT crazytown.

I was driving on country roads for maybe fifteen minutes before I reached the place. It was so far out of the way that I had serious concerns that I wouldn’t be able to find gas on the way back before running out. One of the main doors had a piece of paper duct-taped to it that just said “MUSEUM”. No further details. (When I told my wife about this later, she just kept repeating “I’m so glad you didn’t get murdered. I’m SO GLAD you didn’t get murdered.”)

I rang the doorbell and wandered around outside for a few minutes—noting a sign that promised I could drink root beer brewed by President John Hanson, himself—before the proprietor opened the door.

“Where’s the museum?” was my first thought. The space was a converted living room in what was very clearly the proprietor’s house. There was a TV and sitting chair in one corner, but the rest of it had fold-out tables covered in binders and papers and books; bookshelves along the middle of the room; display cases; portraits of Presidents. I had to take this in very quickly, before he started in on the lecture portion of the museum. (Half the admission price was for the lecture; the other half was for the museum itself.)

He asked me: Do you believe me when I say there’s been eight presidents nobody knows about?

I did a little research before going to the museum. He isn’t making this stuff up; it’s actually a historical fact, as far as I can tell—there were eight presidents elected before George Washington, under the Articles of Confederation. Each served a term of one year, starting with John Hanson in 1781. George Washington wasn’t President until 1789, so you could argue that he wasn’t the first U.S. President, per se—just the first under the Constitution.

As for the other two secret presidents—one was Jefferson Davis, President of the Confederacy. An American President, the proprietor was quick to point out. Sure, I can buy that. The other was David Atchison, who some say took the oath of office and served as President for a single day in 1849, because Zachary Taylor refused to take the oath on the Sabbath. (I may be remembering this wrong—I only recall that he said someone took the oath of office, but never became President. This was the only person I could find online who fit that description.)

He had a lot of very interesting things to say about politics during his lecture. Not ALL Democrats are stupid. G.W. Bush will be remembered as our greatest President. Nixon wasn’t a crook; he was a prophet. I don’t necessarily mind that the President is black. (He said that last one with an eye-roll.) When he started on Clinton, he made sure to lean in real close and explain to me the difference between oral sex and regular sex. It was one of the most deeply uncomfortable conversations I can remember having outside of a job interview.

At one point he asked me about my own political beliefs. I tend to vote Democrat—but you probably already know that, since I’m a Millennial with a giant beard and a blog about yardsales. But more than I love gay marriage and solar-powered cars, I hate confrontations.

So I lied. I lied my f***ing ass off. I think I even called Obama a “bum” at one point, parroting what I’d seen on Facebook comments sections. I wish I’d remembered to call him “Obummer.”

He was deeply distrustful of the government, although he claimed that Presidents call him all the time. Slick Willy—that’s what he called Clinton—called me earlier this year. He wanted to come by and bring Obama. I told him I’d send them both out on their ass if they showed up. He told me that he turned down a $30-million grant from the government, because he didn’t want to be owned by them. He wanted to keep telling the truth, since we’ve all been brainwashed for so long.

He started asking me about myself, and his eyes lit up when I mentioned that my wife was a university professor studying music theory. How many operas have there been? he asked. “In total? …Probably a lot, right?” He smiled at my response. There have only ever been eight operas. But I don’t blame your wife for teaching that to her students. It’s not her fault she’s been lied to all her life.

After we talked for about an hour, he gave me a guided tour of the museum. He showed me his wall of Presidents—I even added Obama to it. I don’t have to like him. He told me that he was the world’s most decorated historian and that he’s been compared to Einstein, and that this was the only museum in the world dedicated to U.S. Presidents. I think he also said it was the biggest museum in the world, but that was very early in our conversation, when I was still a little gobsmacked.

I’ve even met the Pope! he told me, and he showed me a framed photo on the wall of him, standing in the background with about a hundred other people, meeting the Pope. It’s the kind of thing you’d have a tropey backwater yokel say in a cartoon, and you’d be criticized for being too unrealistic. He also showed me letters and e-mails that he’d exchanged with royalty. One very clearly said it was from the office of Queen Elizabeth; another, from the King of Sweden, nominating him for a Nobel Prize—a prize he told me the U.S. government wouldn’t let him accept. One of two Nobel Prizes he’s been nominated for, in fact. I have no idea if these letters were real, or if someone was trying to scam him (but I have my suspicions).

He mentioned earlier that he’d had several books written about him. One a year! he said. And then he showed me the books, and it was probably the saddest part of the whole thing. His most treasured was a “Who’s Who” directory from 2004. The other one he pointed out to me was Weird Ohio.

That was the saddest part, but it wasn’t the most upsetting.

I’m 82 years old, he told me. I’ve had five heart attacks. Last year I was legally dead for 20 minutes. The doctors wanted to take credit for resuscitating me, but you know who really did it? I shook my head, and he let his eyes look upward to the heavens. I’m not a deeply religious man, but I know a miracle when I see one.

I’m looking for someone to take over when I’m gone, he then told me, and my heart just f***ing stopped. How far away did you say you live? “About an hour-and-a-half, maybe two hours,” I say. Of course that’s the one time I decide to tell the truth.

That’s not so far…he muses. I back out of it quickly by mentioning that we’re moving in the spring, and we don’t even know where; just that we will be—which is, again, totally true. My wife’s job in Ohio is just for one year; we’re gone when it’s finished.

That’s too bad. I could’ve used someone like you. But maybe you could still help me write my second book…

The hell of it is, there’s some real history behind some of the things he says. I mean, to take a very obvious, dumb blogger look at it—George Washington wasn’t President until 1789. The country was founded in 1776. It’s not unreasonable to think someone must’ve been leading during the intervening years. And I never once got the impression that he was intentionally lying about anything he told me, not even the Nobel Peace prizes or the letters from kings and queens.

Before I left, he asked me if I believed everything he taught me today. I told him “you’re a straight-shooter (safely repeating a term he used to describe himself several times), and you have no reason to lie.” He thankfully didn’t press me for elaboration. Instead, he said:

You don’t have to just listen to me. In fact, you shouldn’t. When you get home I want you to look all this up for yourself; you’ll see it’s real. But you should know I didn’t just do this on my own. My ears perked up—are we going to talk about his research methods?

I got all my information where I got everything else. From the man upstairs. And his eyes gazed upwards again.

As for the Space Jam stylus (remember that?), I’m not 100% sure what it was doing in the museum. It appeared to be part of a display case of collectibles, each with a little price tag on it. He never once mentioned them—or the President John Hansen root beer, or the President John Hansen t-shirts and hats he was selling, until I asked about them. I ended up buying a shirt.