I decided to check out the San Jose Flea Market a couple weekends ago while I was in town for Arglefumph‘s wedding, and I can’t say I was super impressed with what was described as “the largest open-air market in the U.S.” Maybe it’s different if you get there during peak hours (I was visiting at 8:15 AM on a Friday), but when I got there it looked like this:

At least those three vendors that bothered to show up probably had some really cool stuff, right? Well…

END_OF_DOCUMENT_TOKEN_TO_BE_REPLACED

Welcome, yard sale adventurers, to My New Favorite Thing!: finding weirdo VHS tapes at yard sales/thrift shops/dollar stores that haven’t been uploaded to YouTube yet, and making them available for the whole world to enjoy. (…Until I’m carted away by the Internet Police, anyway.)

END_OF_DOCUMENT_TOKEN_TO_BE_REPLACED

Another gem from Dollar Bargain! These guys were sitting under a table, inside a box with a bunch of memorabilia from Universal Studios (including several talking Twister magnets. Yeah, like the movie.). The fact that we’re letting this store go out of business instead of enshrining it is proof that we don’t even deserve this planet.

You guys. YOU GUYS! I went to 25 freakin’ yardsales yesterday! It was the best. …At least I think it was; I’ll let you know when I’ve worked up the energy to crawl back out of bed. (Honey, when you read this post, could you please bring me some cereal?) 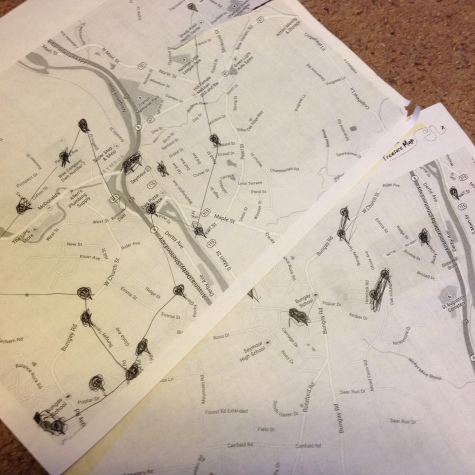 Selections from the three (?!?!) maps they gave us for yesterday’s sales.
Crazy-man scrawls are mine.

So it turns out yesterday was my little town’s community-wide yardsale. Yardsales, yardsales as far as the eye could see! (Well, more or less. We actually have burned-out factories as far as the eye can see, but beyond those? Yardsales. Free rusty nail with every purchase.) You could tell it was supposed to be a big deal, because they had way more signs up than they did for, say, last week’s budget referendum. Pretty sure the yardsales had a better turnout, too, which is weird, because they both primarily attract old people and angry bloggers.

They were selling maps for the sales at one of the local diners, rather than just, you know, actually telling us where any of the sales were. I can kinda get why they’d do that—after all, when you’re selling a product, it makes sense to make it as annoying as possible for anyone to buy said product. It’s the same reason why most grocery stores these days charge an entry fee and nobody really knows where Disney World is.

The first few sales I went to hadn’t started setting up yet—which is typical of southern Connecticut, where the “start time” is more of an optimistic suggestion than anything you’d want to follow—but once they kicked off, they kicked it like they were a horse and you were accidentally standing behind it. (…Yeah, metaphors were never really my strong point. It’s like yardsales are the ocean, and I’m a person who’s really bad at metaphors.)

END_OF_DOCUMENT_TOKEN_TO_BE_REPLACED

You know what? I’m just going to say it—screw anyone who posts their Craigslist ads more than a week in advance. I ended up driving 15 minutes out of my way today in search of a neighborhood-wide sale that ended up not existing, because the stupid listing was posted a week early, and I hadn’t noticed.

…Okay, granted, if I had actually looked at the date in the listing, I would’ve realized that it wasn’t today. BUT WHATEVER. There’s no need to get your ads out that early; nobody cares! Do you really think someone’s going to be like “Well, I was planning to visit my nonnie in the hospital that morning, but NEVERMIND! THERE’S A YARDSALE! CLEAR MY CALENDAR!” These people are almost as bad as the jerks who only hold their sales on Fridays, WHEN EVERYONE’S WORKING, YOU DUMMIES! MAN!!

As I’m learning, there are two kinds of estate sales: those, like the one I went to a couple of weeks ago, where everything’s set up more or less like a typical yardsale, with items priced and arranged tastefully, and professional sellers buzzing about just delighted with the prospect of helping you buy their things.

Then, there’s ones like the one I went to today. Look at your home, right now. Notice how you have everything arranged. Notice how everything’s set up. Very personal. Very cozy. That’s how this place was set up—which is to say, it wasn’t set up at all. Nothing was priced; nothing was arranged neatly on tables. It was as if the owners had gone on vacation, and in the meantime the most enterprising robbers of all time took it over and tried to sell everything. It made me feel weird and creepy.

I didn’t buy anything, although I did find this—on a table they set up in the front yard, to display the most choice merchandise: