FWIW, I didn’t pay either of those prices. (It was a quarter at the thrift store that doesn’t have cool cats to play with.)

BELIEVE IT OR NOT, this is a non-fiction, first-person narrative account of what the Internet was like in 1995—published in 1995! IRC chatrooms, newsgroups, MUDs, a forum devoted to the destruction of Barney the Dinosaur… As someone who still remembers the random jumble of characters that comprised his Prodigy e-mail address (PXVQ62C why would you do this to me Prodigy), that’s the kind of thing I can get into.

What jumped out at me while I was skimming through the book were some of the extremely contemporary topics it goes in-depth on. I know the italics make it look like I’m being sarcastic, but take a look: 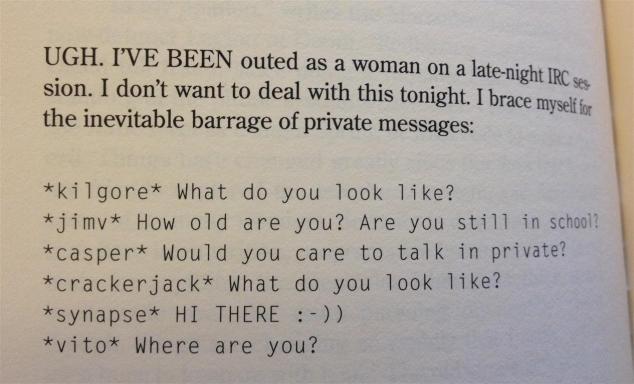 Like I said, this book was published 20 years ago. This stuff could’ve been reblogged on tumblr today.

Twenty years we’ve been garbage toward women on the Internet.

The author of this book (JC Herz) is still Internetting today. She’s active on Twitter, and she also co-wrote an interactive storybook about magical flowers with her second-grade daughter, which is probably the best sentence I’ve ever written in this blog.

As for this book? You’d do well to remember:

One thought on “An Amazing New World”