I hear it every year (from the friends I’m entirely making up for the purposes of this post): “Ugh, store-bought Halloween costumes are just so darn expensive!”

Well GUESS WHAT: I have the perfect alternative for you. (No, it’s not “making the costumes yourselves”; that’s ridiculous and everyone will know.) Have you considered maybe yard sales? For a third of the price as Target you could dress as, for example… 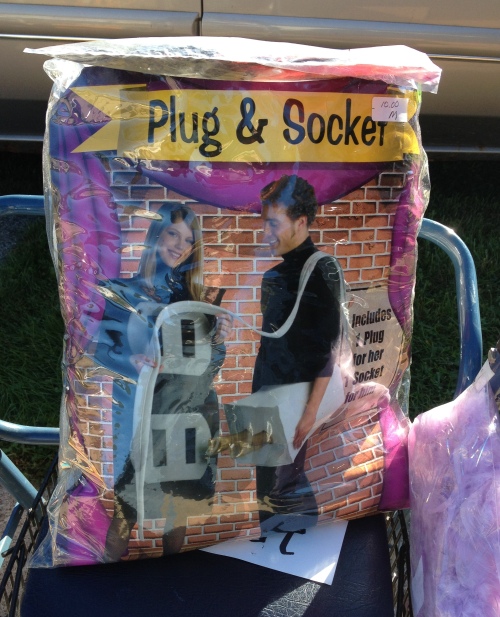 Important note: Someone actually bought this, wore this, and thought someone else would want to do the same. It’s definitely not weird that the boy is the plug and the girl is the socket, and the plug and the socket are both at crotch-level. No, that’s totally cool.

Are you more of a solo act this year, though? Still haven’t found that special someone to dress as a plug with you? Maybe I can interest you in: 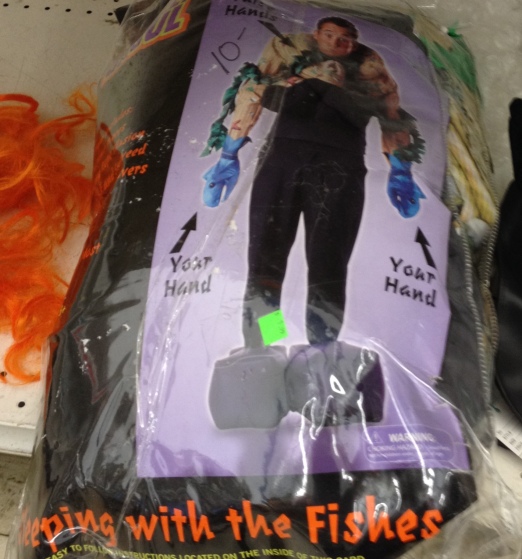 Sleeping with the fishes! I like how the packaging helpfully points out where your hands go. Have fun picking up drinks with those fish-hands, BTW—it’s a good thing no one likes drinking at Halloween parties.

What, too impractical? Okay okay, I’ve got one more:

I don’t know why, but of the three, that’s the one that’s creeping me out the most. I think there’s something in it’s eye…

I was going to end this post by saying “but seriously, don’t buy your costumes new; it’s a waste of money,” but man, there are some really great options out there this year. (As for me, I’m still torn between “guy being eaten by Slimer from Ghostbusters“, and “a taco, basically“.)

2 thoughts on “The Nightmare Before Halloween”