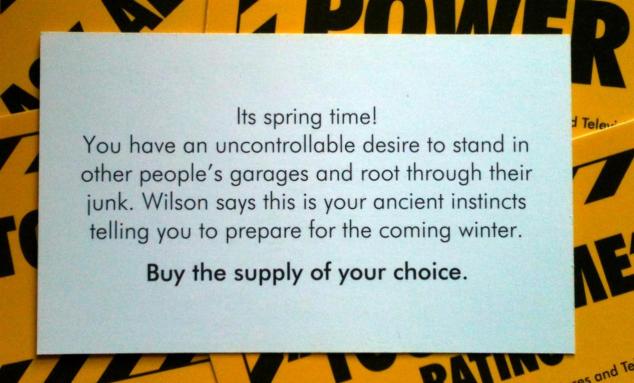 When yardsaling, common sense dictates that you find the best stuff the earlier you go, at the first yardsales you visit. Your competition—aka, your fellow salers—haven’t had a chance to pick through everything yet; the “good stuff” should still be there, waiting for you to hold it up and stand around awkwardly while you wait for someone to tell you how much it costs. (Or is that just me?)

…Theoretically. The problem, however, is that this is a false thing. Over the last several weeks, I’ve been finding that the first few sales of the day are always—ALWAYS—a total bust. Why? I’m not sure. Maybe the good stuff hasn’t been taken out of the attic yet, or maybe the people who start their sales during the wee hours only do so because the only things they need to set up are their three rugs.

Either way, for the first several yardsales today, the most exciting thing I found was this:

Now, I’ll grant you—angelic biker Taz is a pretty rad (and also very specific) collectible. Also confusing; as a rule, I tend to avoid anything that makes me ask “What EXACTLY is going on with that man’s torso?” (No, seriously—what the hell? Are those Taz-shaped pantaloons? Is he standing inside an albino pumpkin? Is…is that what heaven is like?) But it’s not what I drag myself out of bed at…8:30 for.

Thankfully, the sales usually pick up from there. I guess because people realize “Well, nobody wants our collection of 86 coffee mugs from local banks; maybe I should bring out something interesting.” For example, one estate sale I hit at around 10 had a whole bunch of neat antiques, like this extremely vintage vending machine:

For that price, it better still have the food in it.

And also this antique washing machine:

…But wait, where do you put the detergent?!

But today’s two best sales were—inexplicably—at the very end of the adventure. First up today was a massive multifam that had, among other things…

A new interpretation of the English dictionary: 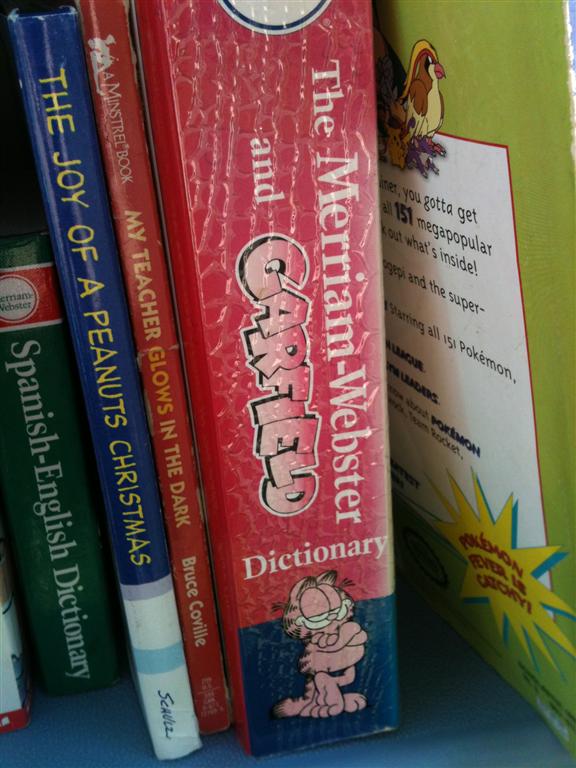 I like how blunt the title is; The Merriam-Webster Dictionary and Garfield sounds like the worst crossover fanfic I’ve ever read. (Note that if anyone actually writes that story, I WILL post it.) Here’s a closer look:

Think the water damage on that cover looks bad? It originally looked like this. Were they reading this in the shower?

Also at this sale were a few exciting variations on the standard jigsaw puzzle:

I was more than half-tempted, but one of the major tenets of the Yardsale Code is that you never buy a used puzzle, because there is absolutely no way it still has all the pieces. (This rule falls somewhere between “Never Pay More Than 10 Cents for a VHS Tape” and “Don’t Touch the Bedpans.”)

You also shouldn’t buy board games for the same reason, but there was no way I could pass this up:

It even came with an official Home Improvement: The Hilarious Handyman Game blue marker! Also the “Wilson Card” (yes, “Wilson Card”) featured at the top of this post—which, if you’ll believe me, I actually pulled from the box at random. I think it’s a sign from the heavens that  yardsales are the best.

According to the back of the box, you have to perform odd jobs around your own house in order to collect money, which I guess makes sense, because people usually get paid to fix their own things. HOWEVER:

If you think that sounds easy, well you better hold on to your TOOL BELT, because along the way, Tim will probably come over to help you (oh no!).

It’s the “oh no!” that really sells it. I can’t WAIT for the next family game night. (I’m sure my wife can’t, either.)

To change gears: Awesome Yardsale #2—an estate sale held by an elderly couple who were moving out of the area—had two major highlights. Highlight the first: 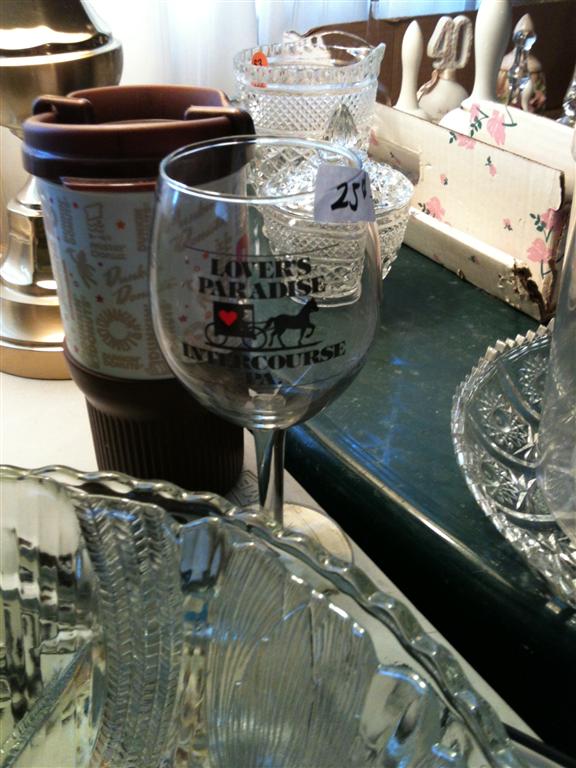 For those of you who aren’t from the tri-state area, there actually is a town in southeast Pennsylvania called “Intercourse,” and we all think it’s very hilarious. I’m wondering—is the “Lover’s Paradise” slogan an incredibly unfortunate word choice, or is it a subtle wink at the consumer that “yes, we know our town is named after sex”? If the latter—do you think the elderly couple were in on the gag? They actually had two of these glasses for sale.

…Hey, you know what that means, right?

I guess they must really love Intercourse.

The second highlight from this sale is an artsy framed photo, and it is–

…Actually, wait. I want to give you a chance to brace yourself for this one. I know this post is already running long; but trust me. You’ll want the extra attention span to take this all in. Because what follows…

…might actually be as cool as the Pear of Sheep.

Are you ready for this? Have you cleared your mind of any and all thought? (Shall you go now?)

AND, SCENE. If you don’t think that came home with me, you clearly haven’t been reading for very long.

7 thoughts on “Get In Your Pumpkin!”