Let’s just open with this, the single greatest thing I’ve ever purchased at a yardsale (note that I say that about everything I purchase): 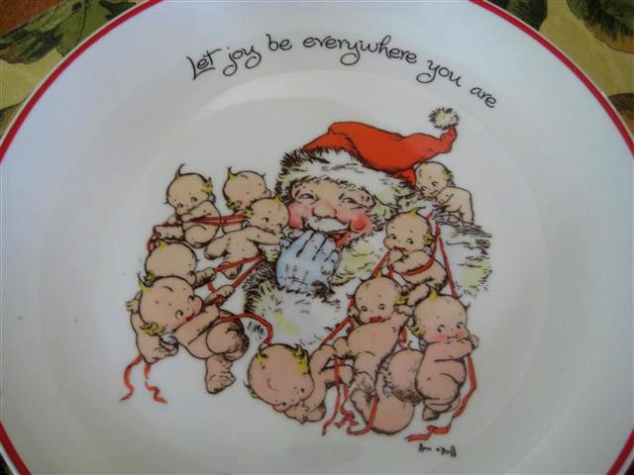 Oh my god, how horrifying is that? I don’t know what it’s supposed to be, but every time I look at it I see a sneaky Santa Clause giggling to himself and whispering “I have all the babies. I have all of them.” You just know he’s going to eat them afterwards. I can’t wait to serve people cookies on it, come Christmas-time. The look on their face as they take that last chocolate chip away, and they have that staring up at them. The true meaning of the holidays.

Incidentally, this is what it looked like before I cleaned it up (I took a picture at the sale before ultimately deciding that my life couldn’t go on without that plate.) Apparently most of the things at this sale had been left out in the torrential rainstorm from the night before, and this was the result. I think the seller’s kind of lucky that he was able to sell anything at all. I expertly haggled him down to $2, by asking him how much it cost, and him telling me “my friend’s selling it for $3, but he ain’t here, so I’ll give it to you for $2.”

This gentleman was also selling, at an undisclosed price, a nearly empty bottle of holy water. Now, I frequent indie professional wrestling shows in the area, and a bottle of holy water is the kind of thing you really want to keep handy at places like that; but it was already more than my poor little reserved nature could take to ask him how much his creepy-ass Santa plate cost.

I also saw this at one of the sales, though I neglected to pick it up:

I don’t think I’ll be regretting this one nearly so much as other past misses. It’s hard to see, but that’s a disposable plastic water bottle all dolled up to look like…I don’t know. A pirate? A proper English gentlemen? A vampire wearing a skirt? I wish I knew what. Or why, for that matter. The reason the picture’s so blurry is because one of the old ladies running the sale snuck up on me and startled me while I was trying to take it. She did that nearly every time I picked up anything at the sale; I guess she didn’t read Christian’s post on yardsale etiquette. “Oh, you like stamps, do you? I can give you that whole book for a dollar! Dunno if there’s anything in it, but…” “Ooooooooh, d’ya like puzzles? We’ve got a whole lotta them here!” “OOOOOOOOOOOOOOOOOOH WE GOT CLOTHES IN THE BACK YOU KNOW,” etc. I also overheard her accosting some other poor saler, pointing at an item and demanding “You’re gonna try to guess what that is, aren’t yah! We’ve been asking people all day, and so far no one has had a clue!” I didn’t stay at this yardsale too long.

I also got some videogame stuff, though I don’t know how interested people are in that. I would like to mention, though, that I got this PlayStation 3 SIXAXIS controller: 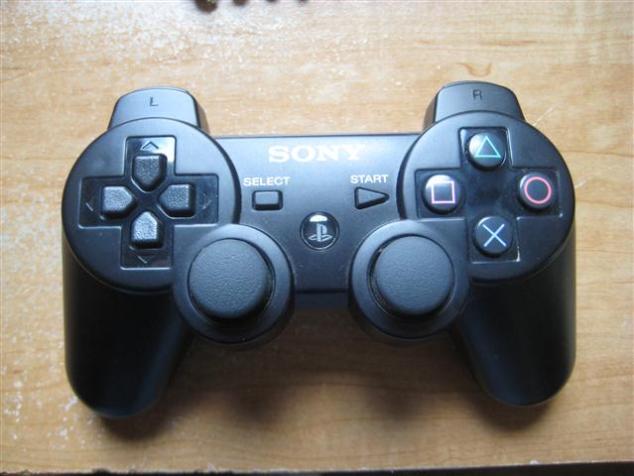 For five bucks. AND IT WORKS! Pretty clean, too! I’m actually a little concerned I might’ve ripped the guy off. His girlfriend was running the sale while he was back in the house, and she sent her kid up to ask him how much “the PlayStation controller” cost. That’s the price he came back with, and I’m wondering if the guy thought he was selling me a PS1 controller, or perhaps an Atari 2600 joypad. I high-tailed it out of there before he could come out and demand that I pay him a fair price.

I also picked up a $2 Game Shark for PlayStation 2, because I’ve been stuck in Lifeline for like six months because I missed a power-up early in the game that’d allow my character to heal whenever I want, and now there’s NO WAY to heal and I can’t possibly continue without it so it’s not really cheating, right?